The Twitch of Nogales: How a Phobia Taught Me Empathy 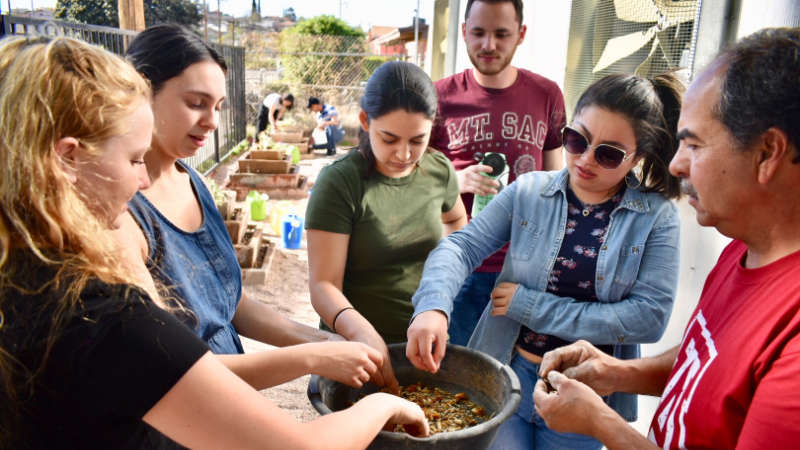 By Deborah Watman, MPH Student in the Biostatistics Track, Ichan School of Medicine at Mount Sinai

There is this twitch. An incessant tapping of shackled feet in the Tucson courthouse. Of wire-scabbed adolescent legs in the migrant shelter. Of my own Allbirds swathed feet in the hacienda. In Nogales, Arizona, and Sonora, we twitch with the fear of the unknown.

As we drove up to the hacienda, dogs ran to greet our white van. Fluffy dogs and bigger scarier, panting black and tan dogs immediately set my phobic body on edge.

A phobia is an irrational, yet somewhat explainable, fear. My shaking limbs alight from a fear of not knowing when a dog will hover, sniff, lick, jump or bite. The fear is present regardless if the dog is lovable or malicious because the uncontrollable unknown is overpowering.

Several days later, during the question segment of an enlightening talk by Seagred, a long-time Nogales resident, I raised my hand. At the risk of feeling like a naive schoolkid, I asked, “Why?” Why was all this – the running, patrolling, catching, detaining, testifying and all the border talk, even a thing?

Many Americans are afraid of losing jobs, of being attacked, Seagred explained. Fear. That is what has erected the walls, the long lines at border control – fear is what perpetuates this cycle of nightmares. If you are afraid, you create walls that functionally displace your own fear and transport it to those who are desperate to leave their own countries, and are now terrified.

We crossed back into the U.S. and I was filled with a sort of shame, a sadness to be returning to this exclusive country. Yes, some fear is a necessary form of protection for people. Yes, we may need border control to protect American neighborhoods from drug cartels, and perhaps we must focus on stabilizing our own citizens before helping others. Yes, we may need security to maintain order and safety within our country. But, does that necessitate all the barbed wire that cuts across the land and then across migrant legs? Do we really need all of it?

Dozens of men are seated in rows. Their legs, in unassuming jeans, tapping with the anxiety that charges when you know your life is about to turn from hope and back towards difficulty. Shackles restrained hands and ankles, whose twitching elicited clinking sounds of metal that incited the prickling behind our eyes. “Martin Lopez, Jose Fernandez…” They were called up by name, as they may have been called for graduation. Instead of a commencement gown, the name-caller dons the official judge’s robe as he sits alone, about to preside over their jurisdiction. “Are you aware that on March 25 you crossed the border illegally and with this trial you will give up your right to further legal actions and be sent back to Mexico?”

“Yes”. “Guilty.” Tap, tap, tap. The entire process is machine-like, as its name “Operation Streamline” indicates. The judge is emphatic and stern as he goes through the mechanics of deportation.

The law is different for those under the age of 18. Young migrants found on the U.S. side of the wall are returned to a shelter in Mexico. Social workers process the felony, contact family, and send kids back to the lives they tried to flee. We met these young adults, many with scrapes from resisting the barbed wire border. In jeans, and younger faces than their older counterpoints in jail, their feet are unburdened by shackles but weighted with similar tremors. Through words and drawings, the creative arts bridge some of our cultural gaps as we share stories. My young partner drew his town on the right as I drew the hacienda on the left. We drew a path connecting us across the inked line that represented the wall that ran through his town and mine. As we worked together, the young boy twitched. Because he too, did not know when he was going home. Or he knew, and was afraid of what awaited him.

The kids are hyper-eager, running around, coloring with us, hugging us. They jump with the possibility of going somewhere new. They have already turned themselves in, seeking asylum, and have a sponsor who will allow them to cross the country where the American Dream lives on. Parents tremble with responsibility as their smiling children twitch with a new type of excitement, fear and the thrill of the unknown.

My fear of dogs is silly, trite and generally insignificant. But, Nisa and Jeff, the gracious, fun and personable owners of the hacienda noticed. They repeatedly moved the dogs away from me, because fear, baseless or not, is real, pervasive and debilitating. And love and kindness, as Jeff and Nisa understood, is its only antidote.

That is what we practiced in Arizona. We loved. Writing with the teenagers, coloring with the children, taking blood pressure of geriatric patients, immunizing dogs with anti-rabies vaccines, and mentoring high school students at the Tohono O’odham Nation. We opened our hearts to people who are so often afraid. Like Nisa and Jeff we were there to say, “We recognize the fear that you are dealing with, the anxiety and the shakes that you feel, that pervade your body. We see you and we care.” Empathy, is perhaps the precursor to love and kindness and it is, I believe, the driver of public health. We proactively work to create change, to do something that will make healthcare more accessible to people. It is why we went to Nogales, to serve and to learn and to feel.

Deborah Watman is a second year Masters in Public Health Student at the Icahn School of Medicine. In the bio statistics and healthcare management track, she is exploring healthcare consulting.
Deborah is passionate about geriatric care and improving the quality of life for the rising population of seniors. She is excited to learn more about geriatric healthcare in Nogales, and about the community at large.
Deborah loves traveling and experiential learning programs and is excited about this group. Deborah enjoys reading, yoga, biking, and semi-sweet chocolate chips.