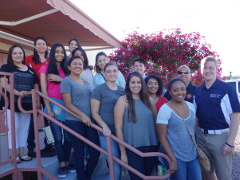 SEAHEC’s Frontera Border Tour was a great success this Summer. SEAHEC hosted 13 health professions students who came to Nogales for three days to explore health issues and healthcare delivery systems in rural communities. The students spent their first day in Sells, where they were welcomed by Jenny Becenti, Health Department Director for the Tohono O’odham Nation. They spent the day in Sells, where they met with Tohono O’odham Chukut Kuk District Chair and Vice Chair: Elaine Delahanty and Kendall Jose to learn about how culture influences health and healthcare. Ms Delahanty and Mr. Jose also talked about how health and healthcare delivery are influenced by proximity to the US Mexico border, which transects the Tohono O’odham nation. The students also participated in a discussion of how O’odham traditional medicine practices are incorporated into healthcare in the Tohono O’odham community.

Later, the students toured local Indian Health Services facilities to learn how the federal agency works with tribal nations to deliver healthcare. The day ended with a windshield tour of the Sells community, led by Sandra Sixkiller. A key stop on the tour was the Tohono O’odham cultural museum. The students were welcomed by Ana Montoya, Museum Specialist & Bernard Siquieros, Education Curator. 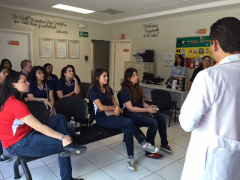 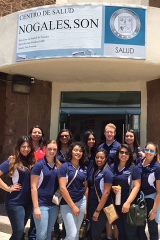 On June 9th, the students met with SEAHEC Executive Director, Gail Emrick, who provided an overview of SEAHEC and led a discussion on US Latin America Political /Historical & Immigration Issues. They spent the rest of the day talking with health professionals in Nogales, Sonora. They visited Centro de Salud with Dra. Maria Esther Solis-Blanco for an overview of services at the facility. During the tour, Dra. Isabel Sandate introduced the Centro de Promoción Program (Promotion Center) at the Centro de Salud. (Health Center) Dr. Carlos Borquez, who runs an innovative program for teaching people how to manage their diabetes, provided an overview of prevention services at UNEME-Enfermedades Crónicas (Chronic Diseases Prevention Program) 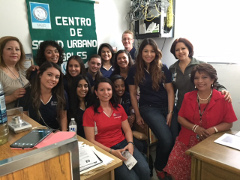 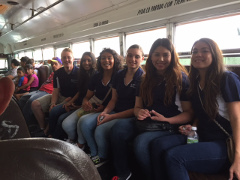 The students ended their day back at SEAHEC to debrief before returning to Tuccson. During the debrief, students reflected on the experiences they encountered during the week. One theme that stood out was health equity. One student commented that she had never considered working in a rural community before, but after her experience here, she said she would give that idea a second thought.