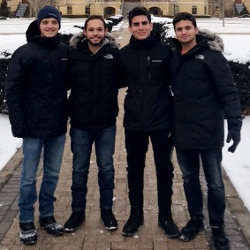 By Diego Garcia, SEAHEC Guest Blogger, University of Notre Dame November 27, 2017 This past semester, I have been working in the office of the Notre Dame Physics Department as a Secretary. I mostly stamp exam books for the department, work on small projects, and do clerical work. I really enjoy the job; it’s simple, pays well, and gives me exposure to the physics department at ND. That final aspect about the job is the reason I chose to work here. I intend on beginning research in physics next semester, and I feel that working here allows me to learn what each professor researches and exposes me to opportunities I might not otherwise know about. I realize most high school students don’t have a good idea of what work-study is and how exactly it works – I know I didn’t. Work-study is basically a way to pay off your student loans and tuition. Before beginning a semester, one can choose to participate in work-study. The Office of Financial Aid of the university then includes the predicted amount of money that student will make from working into the financial aid package. In work-study, students work short hours for a library, facility,… Continue reading

December 17, 2017 After my first finals experience in college, I am absolutely exhausted. I returned home to Nogales yesterday, and slept a full 15 hours! This past week, I took three final exams. I was lucky enough that none of them were on the same day, for many students took two and even three exams in one day. Last week was stressful, draining, and overall awful for my sleep. I took final exams Monday through Thursday of last week. During the weeks leading up to finals week, I kept telling myself to study in advance for my tests and not leave it to the night before. Well, it was easier said than done. I had a ton of work to turn in before finals week, and that took my entire weekend leading up to it. Monday was my Physics final. I began studying the night before around 10. The exam took place at 4 in the afternoon. So, I thought I could study from 10 pm – 6am, take a nap from 6 am – 10am, and continue studying during the final hours. Not surprisingly, I went to sleep around 1am and woke up at 2pm. I woke up… Continue reading